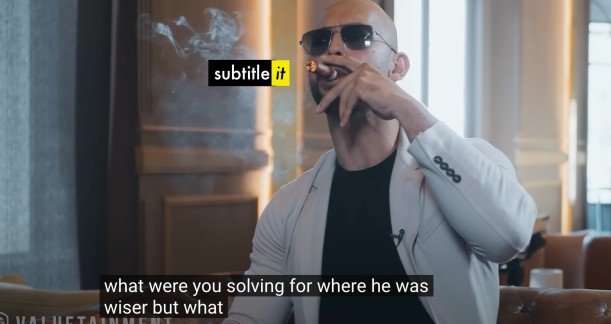 If I was a media company I would have done it differently. That would’ve been smart.

i would have also talked to them, I understand I am the most viral person on the planet.

They could’ve done that but they were emotional. Still, that doesn’t change anything.

There’s millions of boys now who think like me.

They don’t want to assign themselves any feminist ideals.

Most men want that, and I they think they will just chop my head off and put someone else… it’s not going to work.

The most upsetting is this: I find it extremely hypocritical, that the system itself pretends it cares about men’s mental health.

But when I tell them about my personal story to become a man of status, to go through pain and use their trauma to success. When I talk about men’s mental health they delete it.

Im the most popular man on the planet and 98% of my content is not even about women, it’s motivational.

I’m out here genuinenly saving lives and saying to men: The world you are living in it’s so competitive. You don’t have a mental disease, you are just in a competitive environment.

People are very familiar with the image of the archivillain turning into a hero. Where’s Batman at?

It will take time for people to start realizing.

But to say that I’m dangerous and need to be deleted is dangerous for men around the world.

The best thing about being a man is that you get to build your character from the ground up. You get to choose if you want to be a musician and be sensitive, a UFC fighter and be aggressive. I inspire men to look at themselves as a blank slate.